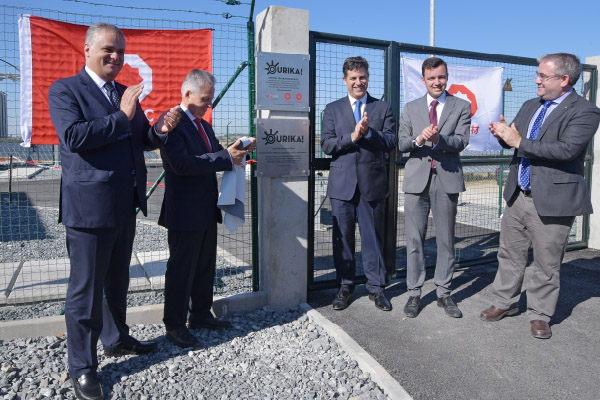 PORTUGAL: The inauguration of WElink Energy’s Central Solar Fotovoltaica Ourika was held on Thursday 26th July 2018. The plant is the largest in Europe to be connected and operating without public subsidies.

Speaking to Voz da Planicie, Mayor Marcelo Guerreiro stressed that it is a great moment for Ourique.

“The plant is a pioneering project at European level and will not only be the first large power plant that has no guaranteed tariff supported by taxpayers, but the first connected directly to the National Electricity Network National Transmission Network according to the new regulation for linking generators to European Union networks”.

“The opening of the Ourika plant sends a clear message that PV Solar is now a mature technology pushing into the post-subsidy era.  We were attracted to invest in Portugal by the leadership demonstrated by the Portuguese Government in delivering its ambitious low-carbon targets, and its contribution to the European Commission agenda. Together with our partner, CTIEC, we are extremely pleased to have contributed to Portugal’s renewable energy strategy by developing this ground breaking project.

The significance of the Ourika project is clearly demonstrated by the attendance at the inauguration of such distinguished guests. On behalf of WElink Energy and CTIEC I would like to thank them for their support in commemorating this event”.

“WElink Energy is committed to leading the new era for PV Solar in the European market and contributing to a sustainable and greener future. We are grateful to our partner, CTIEC, and the leadership and vision of President Peng of CNBM for enabling this project. At the same time our sincere thanks goes to our business partners who have worked closely with us on this project, EcoSolar who supported the construction of the plant, and Holaluz who are acting as market agent; and the excellent support from REN and DGEG, whose technical guidance and support was invaluable. We thank them for their partnership collaboration”.

Looking to the future he further commented: “Whilst Ourika will always be the first subsidy free solar project developed in the Iberian Peninsula, our focus now switches to our next project Solara4, the 221 MW project being developed in Alcoutim. We are targeting completion of this project in Q3 2019. Beyond this we are committed to achieving our 1GW target for development in Iberia by 2020”.

“This shows that Portugal today is a country that is competitive in terms of renewable energies without needing subsidies, which is due to the optimum conditions that the country has for solar production but also to the technological evolution that has taken place. What we think is that in the coming years with what is already licensed until 2021, it will be possible to more than triple the production capacity in solar.

This strategy we follow from a regulatory framework without subsidies will eventually contribute to the fall in the price of energy in Portugal and what we really want is to continue with a consistent strategy of increasing the space of renewable energy in production.”

WElink and its strategic partners’ pioneering success in delivering this project, which has not received any subsidies or public investment and is compliant with the new European Network Codes for energy transition, is a major advance for renewable assets in Europe towards the progressive replacing of conventional generating plants in the coming years.